'That Was Just A Noise' - Final Release from RotPM

After 14 years as a band Revenge Of The Psychotronic Man are calling it quits.  They are planning to go out in style playing loads more gigs before finishing with an all-dayer in December. We are releasing one final record, titled ‘That Was Just A Noise’, continuing their theme of Alan Partridge references on their albums.

The album, which features tracks from their 3 TNS released albums; Make Pigs Smoke (2009), Shattered Dreams Parkway (2012) and Colossal Velocity (2016) alongside rare, out of press tracks from 7”s, splits and EPs and two brand new, previously unreleased tunes, will be out in June.

You can buy the album on 12” vinyl, CD or cassette. We have bundle options available too. You can get your gig ticket and a t-shirt designed by Danny Combie from Wolf Mask alongside the album.

Head over to the webstore to pick up record and final gig ticket… – http://bit.ly/2oBRSbn

The band take influxes from the likes of Zeke, Kid Dynamite and Alan Partridge (whom the title is a nod towards) and have built a reputation across Europe for their high energy, full throttle live show and ridiculous audience interaction. During their 14 years they have played with the likes of Bad Religion and NoMeansNo, played over 500 gigs and sold over 5000 records/CDs. They have also done a Maida Vale session for the BBC Radio 1 Punk Show and had a track picked by Steve Lamacq in his favourite 5 independent songs of 2012.

They have earnt much respect for their support of independent music. Bassist/vocalist, Andy co-runs TNSrecords and is part of the collective that runs Manchester Punk Festival and all three members have booked numerous DIY gigs. The band also work hard to support independent music venues. This final release includes tracks from their three critically acclaimed TNSrecords studio albums, plus out of press rarities and a couple of previously unreleased tracks spanning the bands whole 14 years.

The band summed up their time in their parting statement by saying; “every part of being in this band has meant the absolute world to us. The support we have received has been so humbling. Thank you so, so much from the bottom of our hearts. This has been a life-changing, mind-blowing and wonderful experience from start to finish.”

The reaction to the split by fans and fellow bands alike has echoed their importance to the DIY scene. They will be missed, but in true Revenge style, they will go out hard and fast and in the most ridiculous way possible.

“I didn’t see The Ramones play in New York and I didn’t see The Clash play in London but in thirty years I can say I did see Revenge Of The Psychotronic Man play in Manchester… with Mr Blobby”. Colin’s Punk Rock World

“Aggressive punk that makes Black Flag sound relaxed… 17 explosions of excellent, snotty rage that you can both smash the system and skateboard to.” 4K Kerrang! Magazine

“‘Colossal Velocity’ is a relentless barrage of masterful punk. Fucking brilliant! This, ladies and gentlemen, is how it should be… Punk rock for 2016. Modern, thrashy, intense and bloody refreshing.” Blank Slate Creative 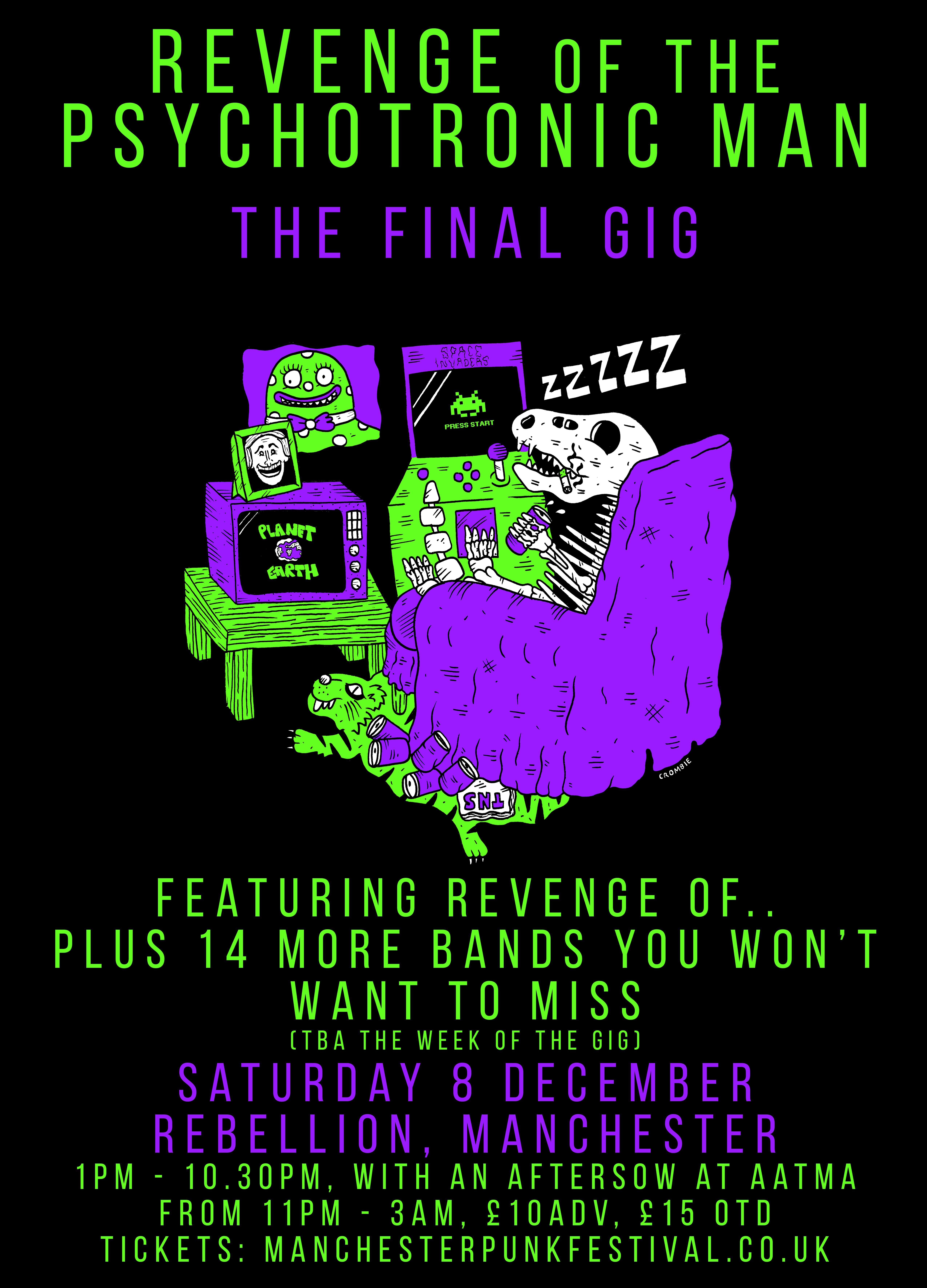