There is only two and a half months to the first ever Manchester Punk Festival and it’s time for the final band announcement. On Thursday we announced that the Filaments will be return to Manchester for the first time in 10 years to headline MPF. If you have been keeping a eye on the MPF facebook page you will have also seen us announce Creeper and Atlas Losing Grip. On top of these we have another 13 bands to announce, taking the Manchester Punk Festival total to 47.

Apologies, I Have None are Manchester favourite since forever. This London four-piece will be playing some of the best written songs to come out of the UK scene whilst headlining one of the MPF stages. They’re brutally honest, you can’t help but get involved.

As announced on Saturday Atlas Losing Grip are hitting these shores. They have made a name for themselves touring Europe with some of the best bands around so we are delighted to bring their unique blend of melodic hardcore and heavy metal to Manchester.

That Fucking Tank are Aptly named because their sound hits you like a fucking tank. Two piece from Yorkshire playing some of the most captivating live sets you’ll see. No words, just pure riffs.

We also have a brilliant new band from the South Coast who blend the likes of Alkaline Trio, Misfits and UK hardcore together for an unforgettable debut EP out on Palm Reader Records. Don’t miss your chance to see Creeper.

Ex-The Steal guitarist but also an amazing singer/songwriter in his own right. Not played a gig in Manchester forever but still one of the best around, if you’re into The Weakerthans, you’re into Dave House.

Also on the acoustic stage Great Cynics’ Giles Bibber will be taking it back to how it was before the full band. Amazingly catchy pop songs sung with soul.

We also have The Murderburgers who will deliver some pop-punk from Scotland with songs about being flat broke and going mental. Whilst The Human Project will deliver a large slice of fast, loud, melodic punk rock all the way from Leeds. With Darko also delivering some melodic hardcore from the south.

Across on the acoustic stage we will have Joe McMahon from the awesome band Smoke Or Fire. He will be joined by Captain Hotknives and his songs about  skankin yr nana and the pathetic nature of petty racism.

We are really happy with the line-up. If you bought early bird tickets you are getting all this for just £10. Tickets are still just £15 which is still incredibly cheap. Head over to the TNSrecords webstore (cheapest & t-shirt deals available), Sound Control or See Tickets to grab your ticket now.

Keep up with all the latest information on Twitter and Facebook.We will be announcing the day splits soon and there will also be a free sampler with a track from all the bands playing. 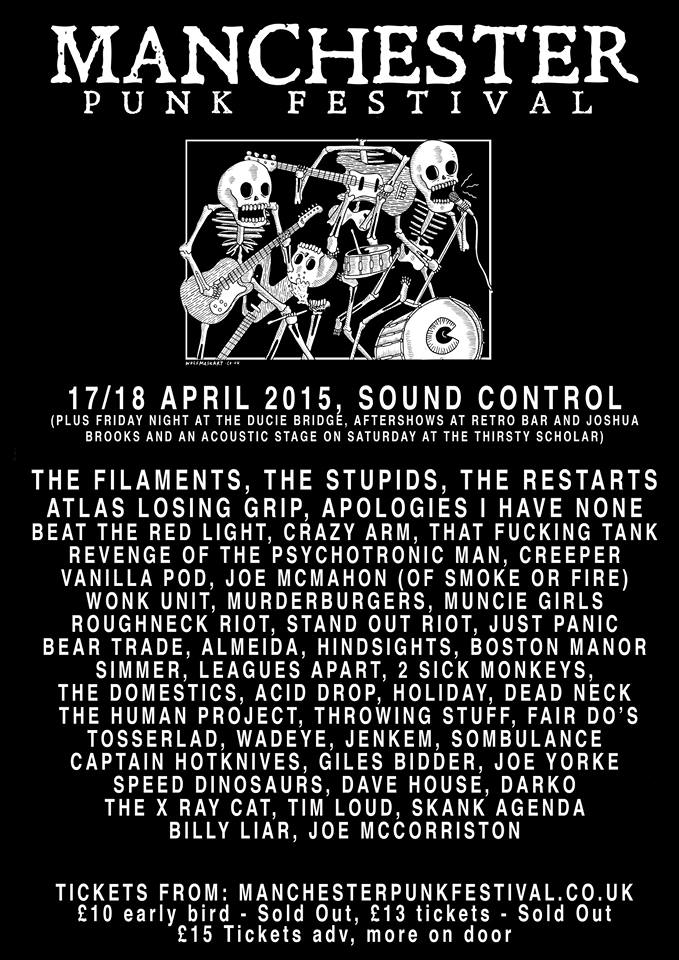