Skip to content
Last week we announced the return of Manchester Ska-core legends Stand Out Riot playing the first Manchester Punk Festival in April, 2015. It is now time to tell you about some more bands that are joining us on 17/18 April.
We are very pleased to announce the next list of bands for Manchester Punk Festival.
80s hardcore legends, The Stupids are returning to Manchester. Last time they were here they played a sold out TNS gig and blew us all away.
Vanilla Pod are celebrating their 20th anniversary in 2015 and will be releasing new material to coincide with that, as well as organising the impressive looking Podstock festival.
Manchester ska-core band, Stand Out Riot, will be making a welcome return after a 2 year break. We also have Roughneck Riot, who are currently tearing up venues all over Europe with their brand of folk punk.
Melodic punkers, Bear Trade, fast punk band, Tosserlad, Ipswich hardcore punks, The Domestics, Leeds skate punks, Acid Drop and the much loved 2 Sick Monkeys have all been added to the bill. They will be joined by a relatively new band, Jenkem, who have formed out of the ashes of Hated Til Proven.
Then there is Sombulance who are a 5 piece fat wreck influenced punk band from South England and Dead Neck who are a 3 piece melodic hardcore band currently gaining a reputation for heavy touring.
These are added to the bands that we have already announced: The Restarts, Wonk Unit, Crazy Arm, Almeida, Fair Do’s, Revenge of the Psychotronic Man, Great Cynics,Throwing Stuff and Wadeye.
£10 early bird tickets for MPF have now SOLD OUT. Tickets are now available for £13 from the TNS webstore HERE. On the 2nd Feb they will increase to £15 and be more on the door. There are also a couple of t-shirt and hoodie deals available.
We will be announcing the headliner and loads more bands on 2 Jan. Expect 40+ bands to play across the two days. 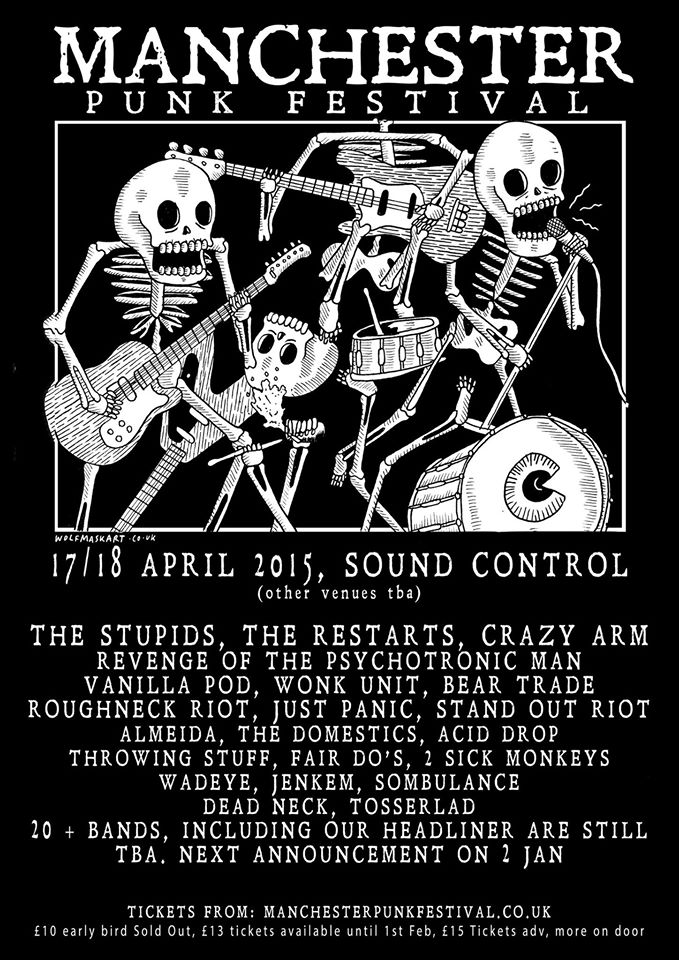